Posted on August 12, 2019 by homeschoolbookreviewblog 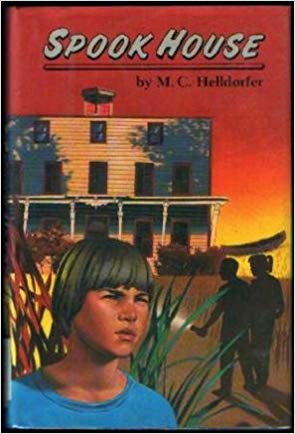 Recommended reading level: Ages 10 and up

Helldorfer, Mary Claire.  Spook House (Published in 1989 by Bradbury Press, an affiliate of Macmillan Inc., 866 Third Ave., New York City, NY  10022).  Twelve-year-old William (Will) Hanson lives in the small Eastern Shore Maryland town of Paradise with his parents, Bill and Barbara, who own the local diner.  His best friend Randy has moved away to Washington, DC, and Will, a long-time resident, thinks that he is going to dislike the boy, Sam MacDowell, and his sister, Loretta Rose but known as Toes, who move in next door, where their parents run a grocery store.  However, he and the two newcomers to the seaside community get together to make something extraordinary out of the deserted old May estate. Together the three children create a haunted house and conduct tours for Will’s classmates Jenko, Al, Neal, and Ray, and others.

However, some strange things start happening.  Who’s behind these unexplained occurrences?  And what’s the motive?  Are the kids safe?  Or will someone get seriously hurt?  I suppose that the basic theme of this middle-grade mystery is change in various guises, and it displays some major tensions between those who want to see change and those who don’t.  Concerning the abandoned mansion, Jenko talks about wanting to “have a chance to get some girls there” and once even lured pink-nailed Sheila to it.  Previously, Will and Randy had gone there and “walked in on four older teenagers passing around a pipe.”  The kids actually find some marijuana in the house which was obviously put there to implicate them.  There are also some references to smoking cigarettes.

When Al talks to Will about his new friendship with Sam, he asks, “You two sweet on each other?” (“Will knew the s-word was carefully chosen”), and says, “I think you’re pink.”  Al also curses a couple of times.  Once it is spelled “Sh—!”, and the other is the “h” word.  Aside from these objectionable items, probably thrown in to make it seem realistic and relevant to modern pre-teens, there might have been an interesting story here, but I found the plot somewhat confusing.  It was difficult at times to figure out what was going on.  And I wasn’t the only one.  Publishers Weekly said that dangling plot lines may make it “difficult for some readers to enjoy or even become involved in. At times, characters and their actions are difficult to tell apart.”  And School Library Journal said, “The number of minor characters sometimes makes the story confusing. The writing is also unclear at times in terms of who said or did what.”  Bottom line—fair.

This entry was posted in mystery, Uncategorized. Bookmark the permalink.