Posted on December 18, 2019 by homeschoolbookreviewblog 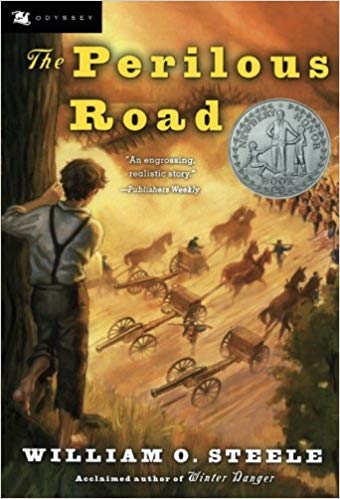 Steele, William O.  The Perilous Road (published in 1958 by Harcourt Brace Jovanovich Publishers, Orlando, FL; republished in1991 by Scholastic Inc., 730 Broadway, New York City, NY  10003).  It is in the fall of 1863, and eleven year old Christian (Chris) Brabson lives with his pappy Alex, mammy Betsy, and younger sister Leah in a cabin at Walden’s Ridge above the Sequatchie Valley in the Tennessee hills.  His older brother Jethro is married to Sally Jean and has a baby girl named Liddy.  Chris positively hates the Yankee soldiers because they took his family’s food and even their old plow horse.  After Jethro goes off to fight for the Union, the Brabsons’ Confederate neighbors begin to harass them, and Chris feels that he has to prove that he is a loyal Southerner.  So when he spots a Northern army supply train down in the valley, he tells his forty year old hunting buddy, the shiftless Silas Agee, who lets on that he might be a spy and could get the information to General Braxton Bragg.

However, Chris learns that Jethro might be driving one of the Federal wagons, so he reluctantly decides that he has to go warn his brother about the possible impending attack. Does he make it in time?  If so, is he able to locate Jethro?  And what happens to Chris during the battle?  The heartbreaking view of the Civil War shows that there was a lot of hate generated during the Civil War, explaining about how sometimes families were split during the Civil War, and helping young readers to understand the feelings of the people involved and the hardships faced by both sides.  It allows children to experience not only the Civil War from a child’s point of view, but also the poverty mountain folk endured while living off the land.

The novel, a 1959 Newbery Honor Book has a couple of common euphemisms (dang it, darn) and some references to smoking tobacco.  It might be a challenging read at times for some due to the fact that a lot of the conversation is written in the actual dialect spoken by Southern people of that day. Chris is thoroughly unlikable—he says dozens of times how much he hates the Yanks—which can make for a hard read, but he learns some important lessons as he realizes the soldiers and drivers are mostly nice people and then discovers the true horrors of war.  And through him, the reader learns that we shouldn’t hate a whole group of people without knowing the individuals and that, despite different beliefs, we should always remain loyal to our family.