Posted on December 28, 2019 by homeschoolbookreviewblog 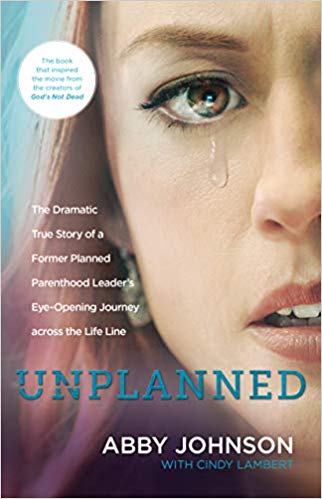 Johnson, Abby, with Lambert, Cindy.  Unplanned: The Dramatic True Story of a Former Planned Parenthood Leader’s Eye-Opening Journey across the Life Line (Published in 2010 by Tyndale House Publishers Inc.; republished in 2014 by Ignatius Press). Abby Johnson reveals her full story how she joined Planned Parenthood as a college student to help women in crisis and rose through the ranks to become a clinic director in her hometown of Bryan, TX.  However, after participating in an actual abortion procedure for the first time, she quit her job in October, 2009, and walked down the street to join the Coalition for Life, becoming a national news story. What happened in that clinic to cause this Planned Parenthood leader and Employee of the Year to take such drastic action? And how did Planned Parenthood react to her abrupt departure?

Earlier this year, a friend of ours loaned us his copy of the 2019 movie Unplanned which is based on Abby’s account.  The film was so moving that I just had to read the book, which is a heart-stopping personal drama of life-and-death encounters, a courtroom battle, and spiritual transformation.  Abby’s unique vantage point from both sides of the abortion clinic property line fence shines light and compassion into the personal and political controversy that surrounds this issue. I agree with the observation that for anyone who cares about the life-versus-rights debate and helping women who face crisis pregnancies, Unplanned is a must-read.

As you can imagine, the pro-abortion (euphemistically called “pro-choice”) crowd hates it.  Wikipedia says that the movie “is based on the disputed memoir Unplanned by Abby Johnson,” citing an article for Bazaar (a leftist publication) by Jennifer Wright entitled “Why the Abortion Movie Unplanned Is Factually Incorrect” (4-16-2019). Of course, to the Left, calling something “disputed’’ automatically implies that it is wrong, but in reality whenever they say that something is “Factually Incorrect,” it just means that they disagree with it.  There’s no reason to doubt that Abby Johnson saw what she saw and heard what she heard.  One critic of the book wrote, “The majority of women who have had abortions do not regret them, so that is another lie they tell you. I knew plenty of them who did and there is no regret.”  Neither Abby Johnson nor anyone else for that matter claims that that all or even most women who have had abortions regret them.  Recently the mainstream media have treated us to a veritable parade of women, including several celebrities, who are openly proud of their abortions.  But there are many, many, many women who do regret having had them.  I know because I’ve read their stories and heard their testimonies.   Unplanned simply seeks to tell the truth and set the record straight.

This entry was posted in biography, Uncategorized. Bookmark the permalink.