Posted on January 28, 2020 by homeschoolbookreviewblog 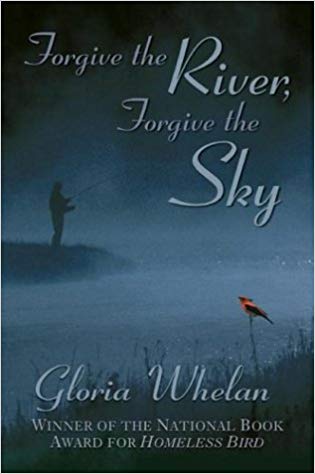 Recommended reading level: Ages 9 and up

Whelan, Gloria.  Forgive the River, Forgive the Sky (Published in 1998 by Eerdmans Books for Young Readers, an imprint of the Wm. B. Eerdmans Publishing Company, 255 Jefferson Ave. S.E., Grand Rapids, MI  49503).  Twelve-year-old Lily Star lives with her mother at Rivertown on the Sandy River in northern Michigan.  Since her father had died a year earlier of a heart attack while fishing in the river they both love, her mother must sell the family’s rural forty acres along the river to the mysterious T. R. Tracy, and the two move to a small apartment over the hardware store in town which the family owns.  T. R. is a former test pilot whose legs have been disabled in an airplane accident, and both he and Lily are angry at the changes forced upon them by fate. Lily is terribly attached to her previous home and connects its loss with the loss of her father, blaming the river, while the paraplegic former pilot blames the sky.

Lily watches fences going up around her former home and resolves that they won’t keep her out, while the newcomer just wants to be left alone.  After their initial suspicions of each other, Lily and T. R. begin to bond when they nurse an injured bird back to health.   Does the girl ever come to terms with her loss?  Is there anything that she can do to help T. R. accept his condition and move on with his life?  Will the two manage to forge a friendship?  This is a story about accepting the death of a parent and accepting someone who is very different, both of which are worthy themes. The first-person narrative should help readers to identify with the irresistible Lily and her problems, and the northern Michigan setting adds color.

Some professional critics don’t like the book.  School Library Journal says, “The episodic story line is simply not compelling enough to bear out the serious themes that Whelan introduces in the very late chapters,” and, “the sum of this novel’s disjointed parts don’t quite add up to the whole of the poignant resolution.”  Kirkus Reviews calls it a “patchy” novel, saying, “The story never really comes together.”  With all due respect, I’m sorry, but I liked it, especially how the two main characters come to an acceptance of their respective situations.  The ending wasn’t exactly what I was expecting or even what I wanted, but it was a good and satisfying conclusion.  Author Gloria Whelan won the National Book Award for her Homeless Bird.

This entry was posted in general youth fiction, Uncategorized. Bookmark the permalink.