Posted on March 20, 2020 by homeschoolbookreviewblog 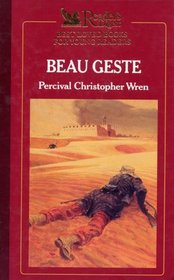 Wren, Percival Christopher.  Beau Geste: A Condensation (original first published in 1924; condensation published in 1968 by The Reader’s Digest Association Inc. and republished in 1989 by Choice Publishing Inc., Great Neck, NY  11021).  Michael “Beau” Geste, his twin Digby, and their younger brother John, who narrates the story, are orphans living at Brandon Abbas in England with their aunt Patricia, Lady Hector Brandon, whose family also includes Augustus, nephew of the absent Sir Hector, Isobel, Patricia’s niece and the object of John’s interest, and Claudia, simply identified as a cousin. A precious sapphire of Hector’s known as the “Blue Water” disappears, and suspicion falls on the band of young people, so Beau takes the extreme step of leaving England to join the French Foreign Legion in Algeria, followed by his brothers, separately, John in part to spare Isobel any suspicion of being a thief.  After recruit training in Sidi Bel Abbes and some active service skirmishing with tribesmen in the south, Beau and John are posted to the small garrison of the fictional desert outpost of Fort Zinderneuf, while Digby and his American friends Hank and Buddy are sent to Tokotu to train with a mule mounted company.

The commander at Fort Zinderneuf, after the death of two more senior officers, is the sadistic Sergeant Major Lejaune, who drives his abused subordinates to the verge of mutiny. Only the Geste brothers and a few loyalists are against the scheme, but an attack by Tuaregs prevents mass desertion.  Later, help arrives and finds that every single soldier in the fort is dead.  What happens to Beau, Digby, and John?  Will any of them make it back to England alive?  And who took the “Blue Water” jewel to begin with? Beau Geste is an adventure novel by P. C. Wren, a descendant of the architect Christopher Wren who designed Saint Paul’s Cathedral. Published in 1924, the novel is set in the period before World War I.  The edition which I read was a “Reader’s Digest Best Loved Books for Young Readers” condensation.  Some cursing and swearing occur, though no vulgarity or obscenity, and there are a few references to smoking tobacco and drinking alcoholic beverages.

It is often affirmed that the man who wrote Beau Geste once served with the Foreign Legion himself and based the book on his experiences.  However, others say that the original novel provides such a detailed and fairly authentic description of life in the pre-1914 Foreign Legion, that it has led to unproven suggestions that Wren himself served with the Legion. Before he became a successful writer, Wren’s recorded career was that of a school teacher in India.  He wrote some sequels which also deal with the adventures of the Geste family and tie loose strings together.  In Beau Sabreur, the narrator is a French officer of Spahis who plays a secondary role in Beau Geste, and in Beau Ideal, Wren details what happened the night of the theft of the “Blue Water.” He also wrote Good Gestes, a collection of short tales, about half of them about the Geste brothers and their American friends Hank and Buddy, who also feature prominently in Beau Sabreur and Beau Ideal, and Spanish Maine (or The Desert Heritage), where loose ends are tied up and the successive tales of John Geste’s adventures come to an end.

This entry was posted in adventure, Uncategorized. Bookmark the permalink.