Posted on June 12, 2020 by homeschoolbookreviewblog 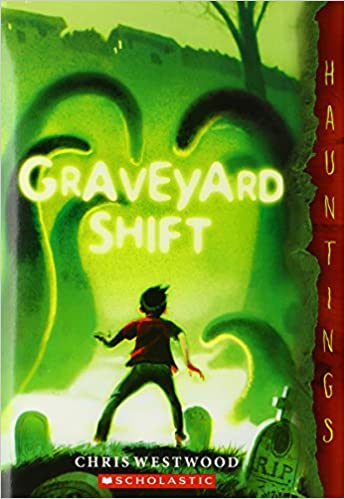 Westwood, Chris.   Graveyard Shift: A Hauntings Novel (Originally published in Great Britain as Ministry of Pandemonium in 2011 by Frances Lincoln; republished in 2012 by Scholastic Inc., 557 Broadway, New York City, NY  10012).  Twelve year old Ben Harvester lives in London, England, with his mother Donna, who is a waitress at a greasy spoon on Mare St.  They have just moved from their old house in Swanley to their new home on Middleton Rd.  Ben’s dad Jim had left some four years before.  One day while sketching in Highgate Cemetery Ben meets a strange man named Mr. Dudley October.  A little over a week later, Ben sees Mr. October again at the funeral of his mother’s sister, Aunt Carrie, in Seaborough.  Ben soon discovers that October works for the Ministry of Pandemonium, a secret organization responsible for tracking down lost souls and guiding them to the afterlife. And he wants Ben to be his new recruit to assist the dead to pass on.

Ben has no idea what a strange and dramatic turn his life is about to take. As his apprenticeship begins, his eyes are opened to a new world of wonder where magic is real and ghosts haunt every crime scene, accident site, and hospital corridor. But with the wonder comes horror, because the Ministry is not the only organization hunting spirits of the dead. The ghoulish Lords of Sundown want those spirits for their own sinister reasons. And as far as they’re concerned, Ben has chosen the wrong side in a very dangerous war with all kinds of ill-mannered spooks and fearsome monsters which populate this alternative London. When his own mother’s name appears on a list of the soon-to-be-deceased, what will Ben do?  Can he save her?  How does his decision affect others?

Graveyard Shift is described as a charming paranormal fantasy-adventure in which death is only the beginning.  If one likes this sort of spooky, macabre story, it is not a bad book.  As to language, besides some common euphemisms and childish slang terms (e.g., heck, darned, pee), there is no cursing, but the name of God is used rather frequently as an exclamation.  Parents may want to know that one aspect of the plot development involves an adulterous affair.  It is only mentioned briefly and not described in detail, but it is there.  The biggest complaint I saw was age appropriateness.  One reviewer wrote, “I loved this book….I don’t recommend it to young kids though.”  Another said, “The book deals heavily with death;…some of the deaths are a little gruesome, and the descriptions of victims are also a little disturbing at times, especially for a young adult novel.”  And one other noted, “It did seem slightly more violent than some children might like.”   There is a sequel entitled Great and Dangerous.