Posted on July 13, 2020 by homeschoolbookreviewblog 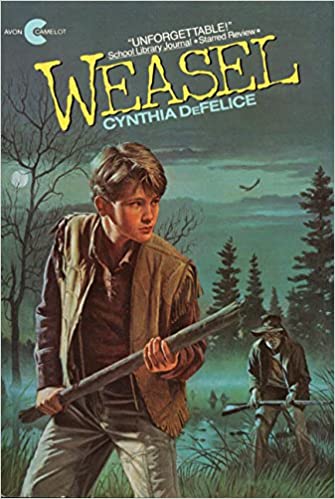 DeFelice, Cynthia.  Weasel (Published in 1990 by Macmillan Publishing Co., 866 Third Ave. New York City, NY  10022; republished in 1991 by Avon Camelot Books, a division of The Hearst Corporation, 1150 Avenue of the Americas, New York City, NY  10019).  It is 1839 in the state of Ohio, and eleven year old Nathan Fowler lives in a cabin with his father, nine year old sister Molly, and their dogs Duffy and Winston.  Mrs. Fowler had died of the fever.  Six days ago, Mr. Fowler went out hunting and hasn’t returned so the children are worried.  Then one night, a strange mute man, whom they later learn is Ezra Ketchum, comes with their mother’s locket which their father always wore and beckons them to follow him.  Ezra takes them to where he is caring for Mr. Fowler who is very ill following a run-in that he had with a former Indian fighter turned notorious outlaw named Weasel.

When Nathan returns to their farm to take care of the animals, he finds that Weasel has been there and either killed or stolen them all.  In fact, on his way back to Ezra’s place, Nathan himself is captured by Weasel but manages to escape.  The boy is so angry at Weasel that he threatens to go back and kill him.  Does Pa ever recover?  Will Nathan actually try to kill Weasel?  What happens to the outlaw?   This fast-paced novel, which is well-written and engrossing, succeeds in building tension to a riveting climax and will inspire strong discussion about moral choices.   Aside from a few common euphemisms (e.g., darn), there are references to Weasel’s drinking whiskey and cussing or swearing, although no actual curse or swear words are found.

The biggest complaint that I saw was that the plot, with its mention of the  torture and killing of human beings; leaving a man in a bear trap to die; slaughtering a pregnant wife in front of her husband; cutting the man’s tongue out of his mouth; raiding and killing Shawnee Indians; a man hunting an 11-year-old boy, capturing him, and bragging to him about his crimes; and the boy’s psychological torment over not killing the criminal when he had the chance might be emotionally disturbing  to children.  Let me say that none of these things are graphically or gratuitously described but just recorded as facts.  Perhaps it would not be good for especially sensitive youngsters.  Perhaps it would better for older readers than the age range listed.  All I know is that when I was a preteen I would have liked and enjoyed this book.

This entry was posted in historical fiction, Uncategorized. Bookmark the permalink.