On the Preparation and Delivery of Sermons

Posted on May 27, 2018 by homeschoolbookreviewblog 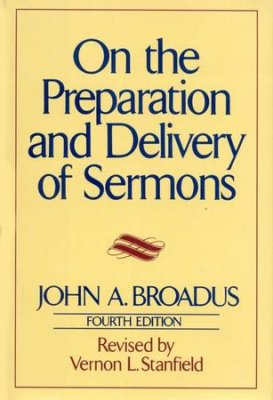 Book: On the Preparation and Delivery of Sermons

Broadus, John A.  On the Preparation and Delivery of Sermons (originally published in 1870; new revised edition published in 1944 by Harper and Brothers, New York City, NY).  Recently reading Dee Bowman’s excellent work Common Sense Preaching, I was reminded of several books on “homiletics” (the study of preaching) that had a great influence on me as a beginning preacher.  I don’t normally review purely religious books at Home School Book Review, but I thought that I would chronicle these works for the benefit of young preachers and men who want to develop their skills to preach whenever they have the opportunity.  The first one, On the Preparation and Delivery of Sermons by John A. Broadus, came to me from my grandfather, also a gospel preacher.  After a lengthy introduction, it is divided into five main parts, Foundations of the Sermon, Formal Elements of the Sermon, Functional Elements of the Sermon, The Style of the Sermon, and Methods of Preparation and Delivery of the Sermon.  Each part is divided into chapters, which in turn are subdivided into sections.

The book is a very detailed and intense work. If there was a “model preacher” in the nineteenth century, it was surely John Albert Broadus (1827-1895) of Southern Baptist Seminary, who became one of the most influential Baptist leaders in the history of the United States. Having the seminary as his life’s work, he taught homiletics for thirty-six years. This study on preaching, originally published in 1870, is one of the fruits of his seminary teaching.  My copy is a “new and revised edition by Jesse Burton Weatherspoon” made in 1944.  Apparently, a third edition was edited by Edwin C. Dargan (republished in 2004 by Solid Ground Christian Books).  What is usually available today is a fourth edition fully revised by Vernon L. Stanfield of New Orleans Baptist Seminary that is said to incorporate recent helpful developments in the field.  Personally, I don’t see what it is about a book on homiletics that needs to be revised and updated.  The basic principles of preaching today are the same as they were in 1870—and in A.D. 50-100 when the New Testament was written.  In any event, I found On the Preparation and Delivery of Sermons to be very useful