Posted on September 29, 2019 by homeschoolbookreviewblog 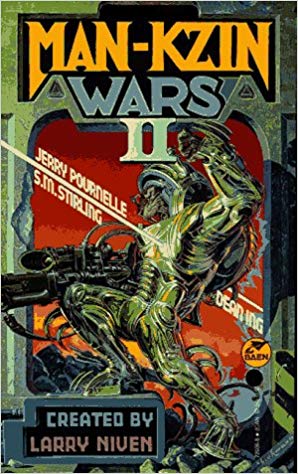 Niven, Larry.  Man-Kzin Wars II (Publisher in1989 by Baen Books, an imprint of Baen Publishing Enterprises, 260 Fifth Ave., New York City, NY  10001). Larry Niven found  a big gap to fill in his Known Universe, as humans encounter the tiger like, carnivore aliens known as Kzinti from the planet Kzin and get sucked into a war with them. This Book 2 in the Man-Kzin Wars Series, a continuation of Man Kzin Wars 1, has two separate stories between its covers about the war between the Kzinti, who don’t take prisoners but eat them, and humans in which the Kzinti, still smarting from their defeat at the hands of humans centuries ago, plan their second assault on Planet Earth.

The first story is “Briar Patch” by Dean Ing, which is a sequel to “The Cat House” in Book 1 also by Dean Ing.  Marooned by the Kzinti on a strange planet which he calls Zoo, Locklear goes to the Earth compound next door to the Kzin compound on the planet and releases a group of Neanderthal humans from stasis.    The second story is “The Children’s Hour” by Jerry Pournelle and S. M. Stirling, which chronicles one of the battles in the Alpha Centaur I system between Kzin and humans.  Captain Jonah Matthieson and Lieutenant Ingrid Raines engage in a secret raid on the compound of Chuut-Riit, the new Kzinti governor of Wunderland.

Several reviewers noted how the wars can be approached by different authors who can bring fresh ideas to the task.  However, the book is filled with cursing (including various forms of the “h” and “d” words), some profanity (the names of God and Jesus used as exclamations, and even a lot of vulgarity (including the “s” and “f” words).  And there are scenes where sexual activity is described or plainly intimated.  Also there are evolutionary assumptions about the development of life on earth.  For those who are die-hard science fiction fans, it is an interesting concept if one is willing to wade through the bad language and amoral sexuality.  (I think that I am being charitable by giving it one star.)

This entry was posted in science fiction, Uncategorized. Bookmark the permalink.