Posted on March 26, 2013 by homeschoolbookreviewblog 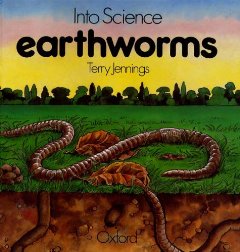 Jennings, Terry. Earthworms (published in 1988 by Oxford University Press). When I was a boy, we often went out into the garden to dig up bait for fishing. The little, skinny worms we just called “fishin’ worms,” but the big, fat ones we called “night crawlers.” Of course, both are just types of earthworms, tube-shaped, segmented animals, the largest members of the class or subclass Oligochaeta in the phylum Annelida, that are commonly found living in soil. When our boys were young, we liked to complement their homeschool science studies with real books. We used this one when our older son Mark was in second grade and studying how the food we eat often begins by growing in the soil.

The copy that we checked out of our local library was part of the “Into Science” series for children published by Oxford University Press. This is a series of topical books that introduce youngsters to the world of science. By using simple experiments and accessible information, these books are designed to develop student’s experiences of the world around them into a real sense of scientific discovery with simple language and clear and colorful illustrations. The same book was republished as part of the Junior Science Series by Franklin Watts in 1990.